The bed gone, we slept Korean style yesterday: two thin mattresses on the floor.  My shoulders did not fair well.  Both of us woke up often.

Piles of clothes lie around the apartment, bastions of chaos that have sprouted in places where I used to drape my jacket, where Nic used to pile her clothes.

The closets have been cleared out; Nic has taken half of her clothes to the donation bin down by the recycling station.  My method is different: wear certain clothes one last time and then donate.  In this way, I can reduce the amount of laundry we need to do before leaving.

The boxes of books and clothes are stacked high, awaiting departure.  Nic seems to think life will be easier if we have everything boxed up and underway by Friday.  I don’t see it happening, but I will concede the point if it means a little less stress and an apartment that has less shit in it.  I just can’t quite wrap my mind around going to the two dinners this weekend in my hiking gear.  When it comes down to it, though, who really gives a shit?  Who have I to impress?

The count: 5 days in Busan.  7 days in Korea.  13 gray hairs in my beard that’ll begin the sun-bleaching process in 9 days.

The cat is gone.  It’s as good a time as any to biographize him here.  As a tiny, 300g animal, he was lost or abandoned by his mother.  HunJong rescued him, brought him home.  The lady cat Uzi (aka Assassin) did not care for the competition for Lindsay-mom’s attention.  In three attempts on Hobak’s life (a couple stitch-inducing attacks on the throat), Uzi achieved the next best thing: Hobak’s removal from the apartment.  One owner said Hobak was not welcome by the other cat.  The next owners went away on vacation for five weeks, but helped him pack on weight; he’s now 4 kilos.  We took care of him and I taught him a few tricks.  I grew attached to the little bugger, a thing I thought I’d never admit.  In spite of his biting nature and general rough-housing, he and I got along well.  I taught him to jump up three feet toward my hand.  He’s a resilient guy. 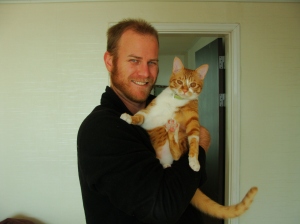 We’ve begun saying goodbye to friends in earnest.  Though we will see SongJu again on Saturday, we got to see her during a brief break from the work and school she’s been buried in for months.  We went to my favorite galbi restaurant in Jungdong, a popular, clean joint with excellent service, all of which are reasons there was a line almost out the door on a Tuesday night.  On Saturday night, we’ll see her again, but I am trying to play matchmaker between Peter and her.  I hope to have pictures of that night, since we’ll go to the first place I ever had dong dong ju and the first and last place I had bahn-deggi (silkworm larvae).