Two Saturday afternoons ago in the heart of downtown Milwaukee, my wife’s family and I–a contingent of seven–went for a four-hour ride on a rented pontoon boat. As we three couples and a chubby one-year old waited for our boat, others got in line, all prepped for their respective booze cruise, prepared to see the city’s skyline through alcohol-softened lenses.

Paradoxically, we were going to cruise among the ruins of ruins: developers came through about fifteen years ago and embraced the decay by converting abandoned warehouses into expensive townhomes, lofts, and apartments. The ruins of industry never looked so inviting. Very few buildings have not been repurposed, but the even the industrial rot–namely, old turnstile bridges deep brown with rust’s age–is left to stand as reminders of what downtown used to be: booming in textile and beer production, forsaken for suburban and rural lands. Downtown used to be cheap and undesirable, home to the marginalized. Gentrification happened, and here we were, a line of white folks with some money to spend on a boat ride to entertain ourselves by looking at the shiny ruins of ruins. Throughout the hours in Milwaukee, I saw exactly two black men. One looked down on us from a bridge as he walked across with his comrade and hollered something that I couldn’t understand. 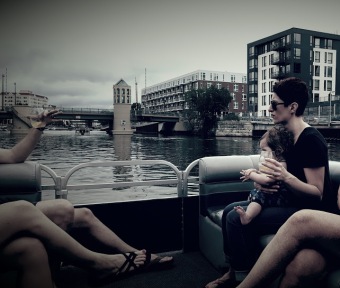 Two Saturday nights ago on the fringes of downtown Milwaukee, there was a shooting of a black man and subsequent riots. An apparently armed black man of 23 was killed by a black cop, aged 24. (They had been high school classmates).

The absolute absurdity of it all strikes me. With the killings of unarmed black men a common sight on captured video from cell phones or dash cams or body cams, the excessive force used on black men–armed or not–seemingly fairly common, it is no wonder that blacks are upset. But that this man was killed for supposedly brandishing his gun at police officers seems justified. Wouldn’t anyone who was threatening law enforcement with a  gun be shot just the same? Perhaps not, but it seems within the realm of logic. It seems also within the realm of logic that people, before destroying businesses in their own neighborhood, would ask the question of whether or not there might be some facts missing, that perhaps there is still such a thing as a justified shooting of a black person.

The sensitive state of racial relations in the union make my comments above feel racist, in spite of the use of carefully qualified language like “apparently” and “seems” that reveal mindfulness of my own ignorance; in spite of my increasing consciousness that my status as a white male gives me an extreme statistical advantage over most everyone else in the country; in spite of the fact that I write this in a feeble attempt to process the complexities of racial relations in the US. The black sheriff of Milwaukee County, David Clarke, seems to have similar thoughts. His Twitter feed on Saturday read:

He has also made this political by writing in the DC-focused The Hill that it is the policies of Democrats that create situations like these in the US.

The actions [of Milwaukee’s poor blacks] were the manifestation of a population with no hope, no stake in the American dream that could provide advancement and purpose and pride of self. They are the ones lied to, exploited by and ultimately manipulated by the Democrats who claim to care. They are victims of the left, but they are not without blame.

It was the comments he made that not only helped me to examine another perspective than my own left-leaning politics (an all-to-common side-effect of algorithmic search engines), but it forces me to examine what can be done. He also writes briefly about the poor educational system; this is a valid argument in that there seems to be a lack of critical thinking evident in most strata of the populace. Indeed, blame your biased news feed, but don’t forget the ailing schools.

Because of my wife’s comments over the years, I have come to the understanding that Milwaukee is one of the most segregated cities in the country. Economic and geographic facts seem to quantify this statement, and Nic’s time living in Milwaukee-proper surely qualifies it. Given this characterization, I would hazard a guess that it is much like any other major metropolis in the US that has recently felt racial tensions and has had protests: the perceived brutality of the police is distilled into one dash cam video that sets off a conflagration that, to people like my father-in-law, was just a matter of time–“I knew this was going to happen.” But then there is his illogical, contradictory statement, “Why is it that black lives only matter when a black person gets shot?” In a different context, this certainly carries some truth to it: what are people (of any race) doing to combat the growing racial tension? What is the black community doing to help keep the peace? What are cops doing so they can avoid unjustified shootings? In the context of my father-in-law’s statements, though, there is a presumption that absolutely no one in the black community is doing anything to affect change. According to Clarke, this is not the case. More importantly, the belief that blacks only care about black people getting shot by cops implies two absurdities: that the ratio of other groups of people being shot by the cops is proportionate to that of the black community; and that the black community–the community that is statistically the most oppressed, at least in Milwaukee–should give a flying fuck about other communities not under siege in the same way: shot, deprived of education, and incarcerated in disproportionate–or should we say, predetermined–numbers.

“Black Lives Matter” (termed “Black Lies Matter” by Clarke) may be perceived as militant group that perhaps sprung out of the ineffectiveness of other–non-violent–movements in the black community. That could be part of the issue right there: movements within the black community. Where do whites fit into all of this? Are the conspiracy theories true: that the state of racial unrest is continually perpetrated under the guise of different, subtle policies that have become more difficult to detect even as the populace has become more educated?–if we can call “educated” to mean access to the un-vetted “reporting” and “research” on the internet through the biased algorithms of search engines and the brains afflicted by short attention spans.

The very problems of racism have been perpetrated for centuries by white government, from slavery to separate-but-equal to the institutionally-biased systems of economy and education. A black president in the white establishment has had little or no chance to make significant changes in 8 years of administration. Don’t get me wrong: Obama has not been perfect, his foreign policy one of dubious nature at times. Nonetheless, not even his seemingly non-racial policies have been allowed to see much light; Obamacare was stripped of traction (perhaps even because it would seem to benefit the less fortunate: the non-whites). The blocking of Obama’s legal right (and duty) to appoint another supreme court justice after the death of Scalia; it is within the realm of possibility that it was just those obstructionist Republicans/Tea Partiers would have been just as disruptive for any Democrat who has already been able to successfully put forth two new justices: Sotomayor and Kagan, females to boot. Even with that all said, Obama has put forth moderate and white Garland, what could be seen as a compromise. Hell, Obama has never floated the idea of a black person to sit the bench. The point here is that the white establishment has put up so many roadblocks to cooperation or negotiation that the intransigence comes across as a result of institutional racism. Lead by example.

So, what can the white establishment do to make changes besides make urban ruins unaffordable? And to the degree that it is within the larger white establishment, what can black communities do besides allowing the angry and under-informed to ruin neighborhoods as a form of expression?

What can I do besides ruin my liver and dull my faculties while staring up and out at polished old warehouses and textile factories, vaguely wondering what used to be?